Why Money Is More Important than Safety in Aviation Safety Cultures The Money Hungry Industry of Aviation 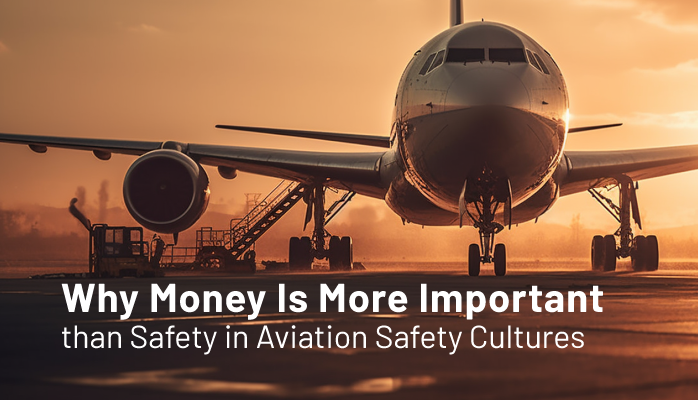 From what I have gathered over the years, every company seems to operate in the same way, money before safety.

Companies will think to themselves “How can I make money while still being safe?”

The problem with this mindset is that the word money comes first. If it were switched to say “How can I be the most safe while still making money?” there wouldn’t be much of a problem.

Today’s safety culture in aviation depends on whether money is going to be made, which is quite sad.

As I realize there are many safety implications set in place by the government, many companies like to run on the bare minimum safety standards to make the most money.

I myself have experienced one of these companies in that I rented a plane and the maintenance of the plane was not all that great. After landing, the flaps would not go up and the right mag was shot.

Now in the grand scheme of things the flaps not going up after landing isn’t the biggest deal, but the right mag being shot is definitely a head turner.

When I brought up these problems to the owner he literally told me “There was nothing wrong with the plane, it must have been user error.”

This is what I’m talking about when money comes before safety. The aircraft owner didn’t want to spend the money for problems that only occasionally happen apparently so he turns his head the other way when things like this happen.

Upon talking to other people who have used his services, some said that similar things happened to them and he gave them the same response.

The more of these companies that are allowed to exist, the less safe our skies will be. But then there are companies with the polar opposite views, with that being that any small thing wrong with an aircraft makes it not airworthy.

The school I fly at now has multiple flight instructors that think this way. If the clock is not set on the right time and they don’t know how to change it, the plane apparently must be grounded. In this case the school loses money from these unnecessary groundings.

Safety in Aviation Not Consistent across Cultures

In today’s society, it is becoming more and more difficult to find a happy medium between safety and still making a good amount of money. On one end of the spectrum, which seems to be a large majority, companies are not vigilant enough with their safety protocols and on the other side with the small few some companies don’t know when it is still safe to fly.

The safety culture in the aviation industry fluctuates from one side of safety spectrum to the other. Generally speaking, I believe we are not safe enough. On the other hand, many people do not know when to let the airplane fly.