What Is a Risk Mitigation Strategy in Aviation SMS Programs 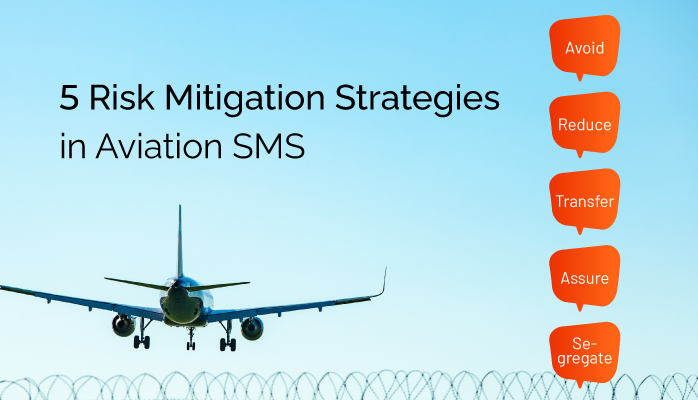 The primary objective of risk mitigation strategies in aviation SMS programs is usually detailed as being a plan to implement risk controls that reduce the likelihood/severity of each identified specific risk. However, this risk mitigation plan in limited in that it does not address the mitigation of hazard occurrence.

That being said, let’s clear up some important risk management terms and see how they apply to real-world situations:

Here are the 5 risk mitigation strategies in aviation SMS programs.

This is done by:

This strategy can only be done when there are multiple activities, operations, etc., that can be used to accomplish the same mission. Fortunately, most missions can be accomplished in multiple ways.

Some common scenarios of risk avoidance are:

Risk avoidance is usually a part of a decision for “go” or “no-go” at the beginning of an operation.

Risk reduction is the practice or keeping a particular action, behavior, procedure, etc., to a minimum, or adopting actions to reduce severity. This strategy is probably the most common risk mitigation strategy in aviation SMS programs. The first purpose of this is to reduce the corresponding frequency of a particular hazard or risk occurrence.

Risk reduction can also involve adopting actions designed to reduce the severity of potential hazard/risk occurrence. To use our example from earlier:

3 – Risk Transfer: Transfer Ownership of a Specific Risk to Another Party

Risk transfer is the practice of changing responsibility of a hazard/risk by giving it to another party. The other party should be aware and accept this change of risk ownership.

For example, a common scenario we see in real world operations are aviation service providers transferring aircraft engineering associated hazards and risks to the:

Risk transfer is a formal strategy in that it involves some sort of document, such as:

As such, this hazard/risk transfer is binding by law because it is contractual in nature.

Risk assumption arises after the Risk Assessment process. Risk assumption means that the risk is “assumed” or “taken on” by the airline or airport SMS program. It’s another way of for an organization to say:

Such hazards and risks should be regularly monitored and reviewed to ensure that they maintain acceptability.

This strategy is akin to the phrase, “Don’t put all of your eggs in one basket.” This usually involves spreading out hazard mechanisms and other risk factors:

The idea is that by isolating specific causes of hazard and risk occurrence, and distributing those causes among multiple controls, people, locations, etc., overall exposure of the organization is reduced. For example, some common real-world example are:

Final Thought: Other Risk Mitigation Strategies As Subsets of above Strategy

Some guidance will list a couple of other strategies, which actually simply tend to be subsets of already mentioned risk mitigation strategy. These sub-strategies are:

An essential part of any risk mitigation strategy in aviation SMS programs is understand how you manage safety. Take this free quiz and find out your safety management style: