How to Reduce Resistance to Aviation SMS with Difficult Employees

It Only Takes One 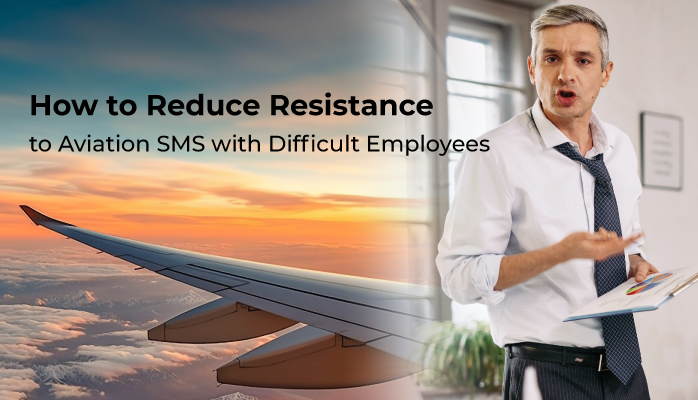 You know the old expression: it only takes one to poison the well.

Resistance to the SMS should never be taken lightly; however, dealing with resistance requires tact and ingenuity in order to avoid exacerbating the resistance.

You will see this resistance regardless of whether you are the safety manager at an:

Aviation safety managers may find themselves poorly suited for dealing with employees who have their own agendas. Accountable executives may mandate that all employees participate in the SMS, but what really happens in your organization? Yeah, everybody falls in line and jovially drinks the Kool-Aid and everybody lives happily ever after? Yes, I'm being sarcastic.

Safety managers are in a better position to see resistance to the aviation SMS because they are closer to the problem.

SMS is about improving operations of the individual operators, which in turn, improves safety of the "aviation transportation system." Safety managers are at the forefront of these SMS implementations. Consequently, safety teams experience a different perspective than the accountable executive.

Resistance to Aviation SMS' Many Shapes

Resistance to aviation SMS comes in many forms:

And many more beyond this – you probably already have several more examples in mind. We can’t ignore the fact that sometimes much of an organization/division/department’s resistance may be largely influenced by one person.

This person could be a manager or an employee who carries weight in the opinions of others. Whatever their position, they are influential. Moreover, they tend to be open with others about their low opinion of the SMS, whether it be sarcasm, disdain, or open indifference.

Reducing SMS resistance and getting that person on board with the SMS will always be a critical step forward towards a healthy safety culture. There are times when the safety manager can do this informally. A couple questions you may ask are:

You could tell the accountable executive of your suspicions regarding the "shitty behavior or attitude" a particular employee displays toward the SMS. This may not always be the proper choice. You could end up creating more resentment that fuels the behavior. You could choose other options.

It’s never easy to confront people with negative feedback, especially when that person’s attitude is the thing you are confronting. It’s delicate at best.

Not confronting the individual directly, and trying to creatively “navigate” around the problem by other safety promotional means, is a dubious plan at best. Even worse, trying to fix the problem with brute force – such as rules or punitive measures – is more liable to make the SMS more unpopular than it was before.

Good aviation safety officers that I know tend to be direct without being judgmental. What that usually looks like is sticking to the facts.

The best steps a safety manager can take if they are suspicious that one person, in particular, is a source of negativity for the SMS is:

Confronting the individual’s behavior – rather than the person – is the most effective way of keeping the confrontation from feeling like a personal attack.

Address the Behavior Not the Person

The line is pretty thin between the two and keeping the discussion from becoming about them as a person takes some delicate maneuvering. This is especially true for more sensitive/difficult employees.

A few things to remember:

Understanding the behavior – the reasons for it – will shed the most light on how you can most effectively mitigate the situation. Is it a learned behavior? Why does the employee practice such behavior? Is the behavior a symptom of the entire safety culture? Or is it limited to this particular employee?

What frustrates any employee about as much as anything is not having clear feedback – especially if the feedback is not positive.

Confronting an employee with observations about their behavior, in addition to helping you understand the behavior, also has the side benefit of:

To communicate well it is critical to be specific, as is when/where/what, about what you observed.

It’s the difference between:

The second example is much more concrete because it communicates the employee the specific behavior as well as when/where the behavior was observed. Especially with more difficult employees/managers, who may be quick on the defensive, having objective, observed data points will be very important for safety improvement and to control the conversation.

Make a Discussion, Not a Lecture

I’ve mentioned making the confrontation a discussion several times. Especially with more frustrating individuals, it is easy to fall into lecturing them about

That’s certainly a quick way to aggravate the individual’s already poor attitude about the SMS.

Discussions mean both of you are talking equally. It means asking them questions about the SMS and listening. Let’s be frank, you may not be interested in what the employee has to say about the SMS, especially if they have been causing problems. That’s okay – it’s beside the point.

The point is simply to engage them so that they will actually consider what you have to say. Secondly, it will enable you to do the following:

Draw Out the Reasons for Behavior

Obviously, you cannot do this if you are simply lecturing them. Chances are they came into the meeting with their guard up.

So it must be a discussion to draw them out. Several effective tactics for drawing out reasons and more information are:

Almost everybody would rather give their honest opinion than sit in silence. Silence has a way of breaking down people's guards and drawing out even more difficult personalities.

Document Before and After

Before confronting someone, it means making observations and writing down details. It also means taking detailed notes after confronting an individual –

Doing so will allow you to track improvement, or, if things do not improve, give you historical data to reference in the future should more serious action need to be taken. Safety managers definitely need to have their ducks in a row (be organized) and have adequate documentation should an employee's behavior be escalated to the safety committee or to the accountable executive.

Aviation safety managers have to wear many hats. Confronting the behavior of a single individual is a tough job, especially if you are the type of manager who values internal harmony. Employee confrontations require considerable social tact, mediation, and very subtle flexing of authority to confront the individual without making them feel:

Beyond this, the safety officer would ideally not only avoid these negative aspects but also nudge the situation in a positive direction. Converting a single, influential individual not only removes the problems associated with them but can actually use that individual's conversion as an example of safety promotion.

Are you interested in seeing what other safety managers do regularly, such as daily, weekly, monthly?

How is your safety culture? Here is a useful quiz for some quick inspiration.