History of Aviation SMS and Four Pillars - with Free Tools 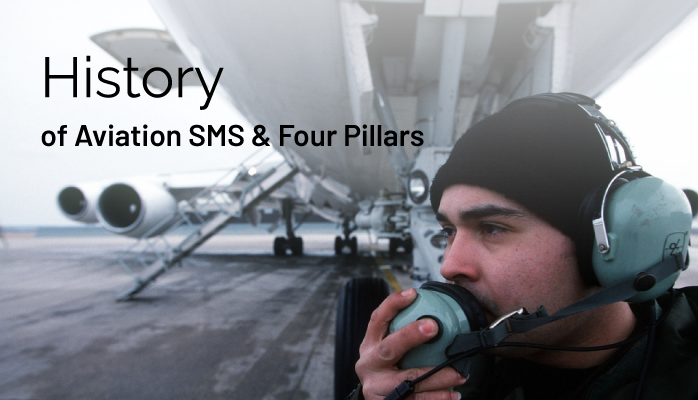 It’s easy to forget just how young aviation safety management systems (SMS) are as their own defined entity. Aviation SMS has truly changed the aviation landscape, but there will certainly be more change as organizations reduce resistance to the change and continue to internalize and practice the mandated SMS regulations.

Many of the central tenets of modern aviation SMS go back much further in history, but as a cohesive whole, 2016 will mark only the end of the first decade for formally solidified SMS in the United States and worldwide.

Tracing the origins of such a colossal safety framework is tough because of:

Moreover, it’s clear that in the history of aviation SMS that there is no specific beginning time, but rather is the subject of an evolutionary process, with various combinations and influences from other management fields, such as ISO 9000's quality management systems. Nonetheless, there are some major milestones in the 50 years of SMS, from various influences and roots to what we formally call aviation SMS today.

We can consider an aviation SMS as a broad spectrum framework of:

What also seems clear is that aviation SMS is not only the long-term plan and future of the aviation safety industry but also other industries as well.

There are many overlaps between the structure of QMS and SMS. Current SMS concepts stress a similar approach towards reaching similar end goals as ISO-9000: they both use a-

-the approach towards reaching their respective goals.

In the 1980's several authorities, such as the New Zealand Internal Quality Assurance and European Joint Aviation Authority (now replaced by EASA), both required that their quality management systems incorporated oversight of an accident prevention program. The Federal Aviation Administration quickly followed suit as well.

Before this, the standard safety improvement model was totally reactionary.

I may be going out on a limb in saying this, but it is my belief that the principle in QMS of *preparing* for creating a quality system was the initial inspiration for SMS’ concept of hazard identification and risk management processes.

Even if that isn’t true, it’s impossible to ignore, both from historical evidence with EASA, the FAA, and other authorities, as well as from the system theory shared by both SMS and QMS, that aviation SMS was initially sparked as an offshoot of QMS principles. Of course, aviation SMS would quickly go through some pretty radical changes to distinguish itself from QMS.

When one considers the QMS requirements for an ISO 9001 compliant company, one is left with no doubt that aviation SMS requirements are derived from the ISO 9000 framework.

1995 would prove to be a turning point for aviation SMS branching into its own discipline. For one, the FAA’s Administrator, David Hinson, worked to cooperate on reaching a goal of 0 accidents. Perhaps this was the first, large-scale, international “proactive” safety meeting, as in, projecting forward with common goals.

Such an approach has turned out to be the logical step before current SMS concerns, which, rather than focusing on the specific accident, are more concerned with the precursors for an event. Precursors are the tools of proactive and predictive SMS because they identify risks before the risks have actually materialized.

-would turn out to play a decisive role in carrying SMS from an "FAA department" and “action plan” to a full-fledged system structure on par with QMS.

Incidentally, the Four Pillars of SMS originated with James P. Steward, the former director for Transport Canada. The Air Line Pilots Association (ALPA), Int’l, developed its SMS around the Four Pillars in the year 2000.

It would be from the work of ALPA, Int’l that such authorities as the FAA and International Civil Aviation Organization (ICAO) would adopt the 4 pillars framework.

2006 the Big Year for Aviation Safety

Just a few years later, the stage was set for modern versions of aviation SMS to start rolling out. That year ICAO began requiring member states' operators to develop and implement SMS for greater safety.

That same year, the FAA focused its SMS efforts towards its certificate holders:

Around the same time, authorities from other countries, such as Transport Canada; also committed to implementing aviation SMS. Today, we easily see that the Australians and Canadians have left to become world leaders in aviation SMS implementations among their operators. I believe this is due to the decisive leadership and dedication of their civil aviation authorities.

From this point on, aviation SMS would continue to solidify as *the* method of safety in the aviation industry.

In 2015, the final SMS rule passed legislation for FAA air carriers to have an SMS program in place by 2018. It is the final “nail in the coffin” so to speak for U.S. operators. It has been a long time to come, due primarily to the democratic nature of the United States' legislative process.

The push seems at this point towards full integration. And why not? An operator who doesn't have a QMS may as well use the SMS to improve operational processes while complying with regulatory requirements. To me, it makes perfect sense. Operators may as well benefit from QMS processes while they expend time and energy on their SMS implementations. This approach of dual implementation has efficiency and benefits the operator.

I expect to see more about these issues in the coming years.

Are you developing your aviation SMS implementation? Do you need to compare your hazard register with common aviation industry hazards? Download this excellent resource.