Four Pillars of Safety: Outcomes vs Interventions in Aviation SMS 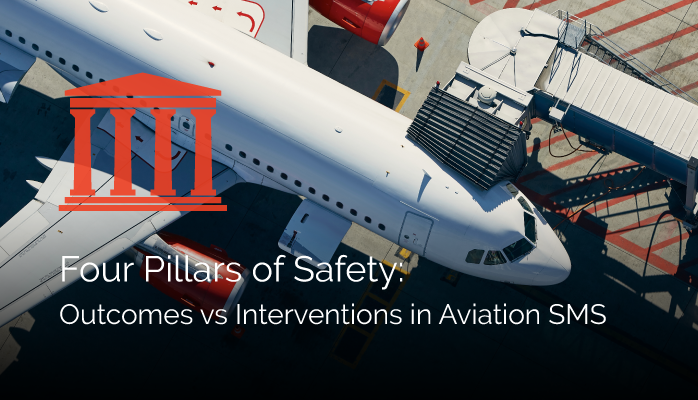 A recent post about four pillars of safety in aviation discussed in part the end goal of aviation safety management systems (SMS). This aviation safety blog post drew a couple of interesting comments regarding the relationship between

The comment said, “I have witnessed poorly promoted safety values yet the same organization achieved good outcomes as individuals intervened to each emerging risk. Risk recognition and mitigation are paramount.”

It’s easy when writing aviation safety articles about the relationship to get in the habit of assuming a direct connection between aviation safety promotion and the outcome of:

The Four Pillars of aviation safety are:

While they are the main components of every ICAO compliant SMS implementation, the idea that each pillar is separate or independent of the other is a total misconception. The four pillars are a way of categorizing the framework behind the SMS' central tenets. Yet they all work together in cyclical relationships.

While this is rather reductive, the process of policy-promotion-awareness-identification-action-revision is the cycle of an aviation SMS, rather than the safety culture itself, that leads to safety outcomes.

However, because the four pillars are not separate, static structures, but always influencing and interacting with each other, different pillars will play different roles in each organization and the maturity of the organization’s SMS. More on this later.

Safety Culture Is a Matter of Intervention Intervention is the key idea in a healthy safety culture. Intervention is simply the process of identifying hazards and/or risks and intervening – such as by reporting it as a safety issue – before the risk or hazard becomes a problem.

All safety outcomes are a product of either intervention or non-intervention. Intervention, of course, depends on the ability to recognize hazards and risks in the first place. But how does an employee get there – to the point where he/she has the ability to identify hazards and be motivated to report the identified hazard?

Any single factor or combination of such things is with the idea of exposing and making visible non-safe situations, practices, and so on. Such is the basis for being able to intervene. Whether or not employees do or do not intervene is an entirely different matter, but one thing remains clear: Employee intervention is the means of a safety culture.

Of course, to be clear, having quality outlets for intervention such as a safety reporting system, trusting relationships with management, and so on, is part of the means of safety culture because it makes intervening easier.

As said, intervention is what directly influences outcomes. Plain and simple. But also as discussed, which types of management practices – i.e. promotion, training, etc. – will carry different levels of importance at different stages of an SMS implementation.

To go back to the original comment that repeated, timely intervention can happen with poorly promoted safety values – there are probably several reasons for this.

For example, an SMS implementation that is mature and experienced will have less need for safety promotion because safety promotion philosophies have already become a natural part of employees’ safety behavior – they have a behavior of intervention, and thus there is not a pressing need for robustly promoted safety values. They’re already present.

It seems natural that safety promotion becomes less pressing as an SMS implementation matures. That is, as the values of SMS are transferred from promotion to actual practice.

Safety practices that are aligned with healthy safety culture are a promotion in and of themselves.

I would also say though, that every organization has to go through the process of transferring safety promotion to actual safety practices. A culture of intervention needs to start somewhere – it cannot simply just “happen” – and initially it usually starts with safety promotion activities to develop healthy safety cultures.

There is one concern with poorly promoted safety values, even in well-developed aviation SMS implementations, and that is sustainability. The aviation industry's environment constantly changes. Having a good safety culture today doesn't guarantee the safety culture will last. Every SMS experiences various and repeated environmental change scenarios that work against the long term safety culture sustainability, including:

There are many other things that will change the dynamics of a safety culture. Ideally, with such changes, the same culture would remain, and any new employees would simply be assimilated into the already healthy SMS. But are rarely things ideal.

Even in a mature aviation SMS, promoting safety values every so often is simply a way of ensuring sustainability.