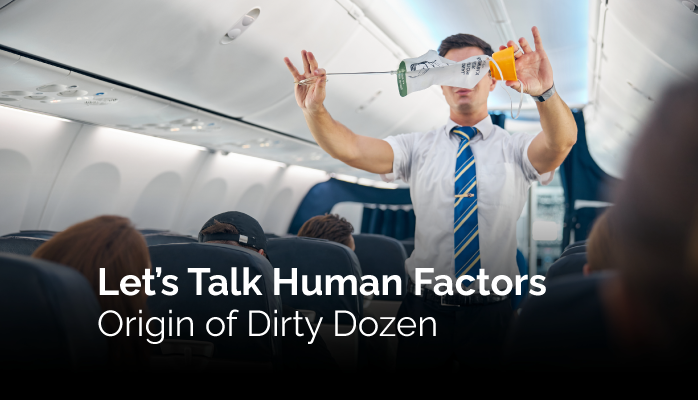 How did it all begin? Today, I want to discuss with you just how Human Factors training and the Dirty Dozen posters came to be.

My father, Gordon Dupont, is known as the founder of the Dirty Dozen and the following is how it all began.

Gordon Dupont before Being Bitten by Human Factors

Mr. Dupont’s life in aviation started when he flew for the missions as a pilot in 1961. By 1968 he made the decision to work in maintenance as an Aircraft Maintenance Engineer (AME). By 1993, he had been with the Transportation Safety Board of Canada for more than 7 years as an accident investigator.

He discovered that while the Safety investigation work was very interesting, it was also very reactive and that every accident he investigated seemed to have the same things in common. Sometimes all he had to do was change the date, names, locations, aircraft registration, etc. of the last accident, and it was the same accident all over again.

When the opportunity arose to join Transport Canada and develop Crew Resource Management (CRM) training for AMEs, he jumped on it. After the Air Ontario Flight 1363 accident (in which 24 people lost their lives in Dryden, Ontario), a report by the Honorable Virgil P. Moshansky stated that CRM training needed to be extended to AMEs. This was just one of the almost 200 recommendations after the Dryden accident.

Mr. Dupont started with an Industry Advisory Committee that included representatives from:

After going through each record, any accident that could be categorized as “careless” was removed from the box and put in its own pile. The careless pile was then read over many times until the twelve most common factors became evident and these 12 preconditions to a human error became known today as the “Dirty Dozen”.

The preconditions are the factors that can cause any of us to make the error(s) we never intend to make. The Dirty Dozen are:

Many times over the years, I have discovered that too many companies have put “the cart before the horse”, meaning that they have the 12 Dirty Dozen Maintenance posters hanging in their hangers, but not one of their employees has had the Human Factors training.

You need to have the training to understand exactly what each of the posters means and how each of the Safety Nets provided on the posters prepares the AMEs to avoid making the errors they never intended to make.